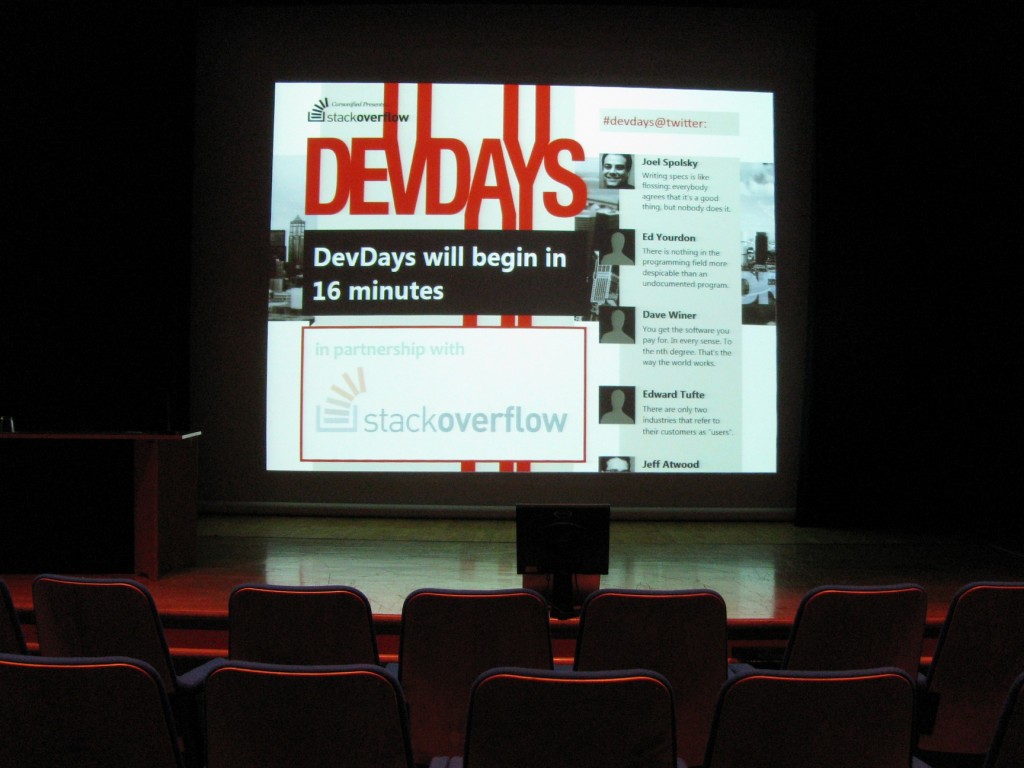 Cambridge was the penultimate city of the Stack Overflow DevDays world (or America and Europe) tour and was situated at Robinson College at Cambridge University. The day was a great opportunity to see introductory presentations on the hotness in the developer community, and also to meet other devs and heroes of mine. The Carsonified team (who were running the events) were also brilliant, and Red Gate Software and Smart Bear Software sponsored the conference (with Red Gate also sponsoring free drinks at a local bar afterwards).

Of course, they were handing out the usual conference crap, but the nice thing was that this was “crap” that I actually wanted and so hoarded various bits and pieces: 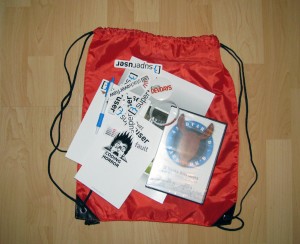 I was also lucky enough to meet up with and talk to Jeff and Joel, who both signed my MacBook (after Joel proclaiming “I can’t sign a Mac!” and making up by drawing a Windows logo on it) 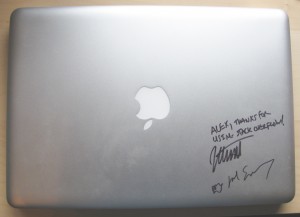 There was an 8 speaker line-up (with Joel speaking twice, or three times including SO Careers) which provided introductory talks on Yahoo! Developer Tools, Principles for System Security, FogBugz, ASP.NET MVC, jQuery, Python and Stack Overflow, as well as an opening keynote from Joel.

The day also started with a funny video put together by Jeff and Joel (which I hope is put up by Joel and Jeff at some point), that included some of the Many Memes of Meta. 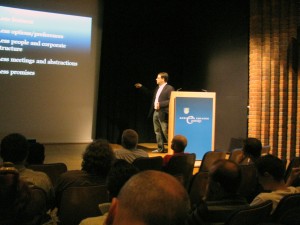 After the intro video, Joel welcomed everyone and  started talking about the dilemma between simplicity and power. His talk was energetic and entertaining, and moved at a good pace. He also had slides, may of which were full of pictures and some which only had one sentence on them (no walls of text) which also made watching more of a pleasure, and emphasised the key parts.

He opened up the talk with some contextual examples of the choice between simplicity and power, referring to a misleading dialog box presented by Outlook, which helped provide an introduction into what he was talking about.

Although not sporting his Union Jack hat (as at London), his talk was littered with English-English words such as “jam” (not “jelly”), an example using Great British Pounds, the pronunciation of “beta” as “beeta” and not “bayta”, and a correction of amazon.com to amazon.co.uk, as well as various other witty or funny comments. 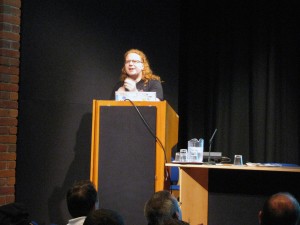 He also showed a lot of practical examples, including his GeoMaker tool which converts websites into maps using the Yahoo! technologies (and has an API providing such output as JSON, HTML and LOLCAT), all of which helped with what he was talking about. He also dealt well with a few technical issues well (like the YUI grid layout working slowly) and made a bit of a joke about it

Since he was giving practical examples and talking around them, and not just reeling off a rehearsed speech it also felt like there was better communication and engagement with the audience, rather than just being stuck behind a glass screen. He also made a small digression at one point of “Everybody who doesn’t do open-source should be smacked” and his presentation was generally entertaining. 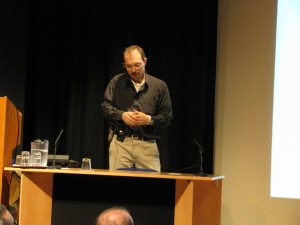 Frank Stajano is a senior lecturer at Cambridge University, and he talked about systems security. Although what he was talking about was very interesting, I felt that it was more academic than the other talks, and not as “fun” at times.

He did relate to the BBC’s The Real Hustle to help explain what he was talking about, and showed video clips of staged cons from the show, which were used to illustrate some of his principles (such as deception and the likes) but overall I felt that the presentation was a bit more static, the slides quite wordy and not as energetic as some of the other presentations. I’m sure well suited to his PhD students but perhaps not as fitting at DevDays. 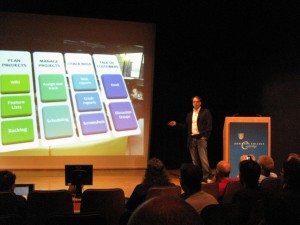 Another entertaining presentation from Joel, showing off some of the new features of FogBugz 7 and its integration with Fog Creek’s new hosted distributed version control system, Kiln. I thought that it was a good demo because he went through a series of steps to demonstrate the features – creating a new bug case, assigning tasks, reviewing estimated shipping dates, scheduling and making a code review, the stages all followed on from one another which made it easier to follow and was nicer than having the stages as unrelated previews.

Again, he brought his good presentation skills into it and made it entertaining. 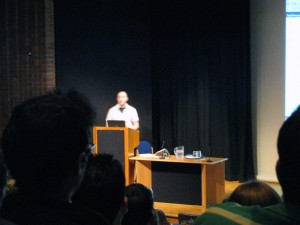 This was one of my favourite, if not overall favourite presentations. Not coming from a .NET background myself, I felt that it was a really well presented introduction presentation. Steven started off by asking for a show of hands of who had used ASP.NET MVC, but then went on to explain what ASP.NET MVC and the MVC design pattern are, before diving into any code, which gave some background for those (like me) who weren’t familiar with the framework.

He then did a demonstration of various parts of the MVC framework, and coded along the way (although copied and pasted longer code fragments that he had pre-prepared as we “didn’t want to see [him] type”).

His explanations were clear and easy to follow, and his slides were full of images and of a good length. Like Joel’s demo of FogBugz, it was nice that Steven’s MVC demo was like a “journey”, and not just simply unrelated samples of code. He basically started from scratch and created a simple website demonstrating such features as URL routing (rewriting), form auto-generation (and customisation) and uploading content to the server. He stated at the beginning that he’d be going through really quickly, but I found it very comprehensible and easy to follow. 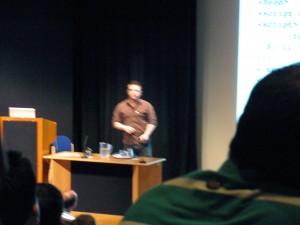 Remy’s presentation started with an Overview of what he was going to talk about, which I thought was a great way to open, and none of the other presentations had done so explicitly. This created a sense of direction in his presentation, and you could see where it was going.

He started off by demonstrating some of the library features of jQuery, such as the Core functions, Effects, AJAX and Selectors and so on. His slide layout was simple (white background, black text, red text to highlight important parts) which also helped with his presentation, and arrows and red text were used to highlight key points as he explained them.

He also went on to show a live demo of creating a tag cloud from the lists which he was tagged in on Twitter, which he did on-the-fly and was very well done – he came across a few minor problems but fixed them quickly, and went into the afternoon break to finish. 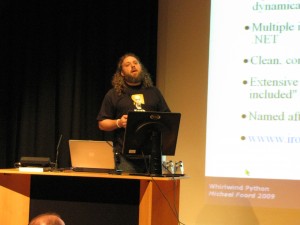 He started off by introducing what Python and IronPython were (after getting a show of hands of who had used either before) before providing a live demonstration of Peter Norvig’s Spelling Corrector which Norvig wrote on a plane flight home in less than a page of code; what it does is demonstrate a (much simplified) version of how Google provides spelling correction for searches (i.e. Did you mean x?) and it is written in Python.

Michael explained how the code worked, and fed it into the IronPython interpreter, whilst also demonstrating some features of Python/IronPython such as dictionaries and collection manipulation.

Although the nature of his presentation was such (because he was typing in the code as he explained it) he remained seated for almost the entire presentation which felt a bit static. Also since most of the presentation was an example he didn’t go into more generic features of Python, which I felt would have made a better introductory presentation.

Michael also showed his book, IronPython In Action which is published by Manning.

Jeff’s talk was very funny and entertaining, and referred to many different aspects of Stack Overflow, such as one of the team’s motto “Failure is always an option”, as well as a blog post created by someone who had a bad experience with Stack Overflow, Crap Overflow.

I recorded Jeff’s speech and some questions afterwards, and the 20-minute video can be found online.

I definitely learnt some new stuff whilst at DevDays – I think I’ll try out jQuery in more detail, and perhaps do something with ASP.NET MVC which looks like a great framework.

I believe that the team have plans to do another set of conferences, perhaps next year, and I’d definitely recommend any developers to go, as a great way to learn about something new, and also to meet and socialise with other devs.