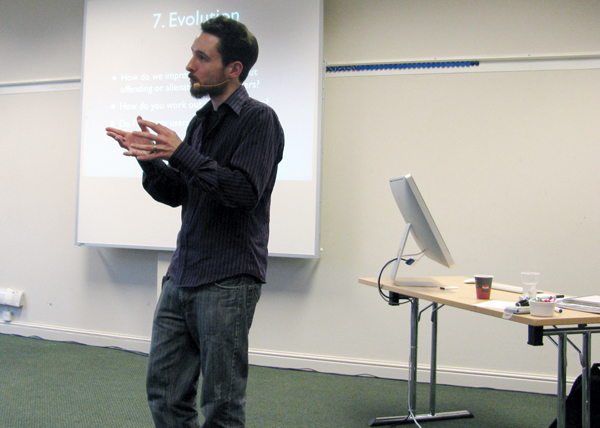 The first day of NSConference 2010 kicked off with two workshops – Concurrency Programming on Snow Leopard by Drew McCormack, and The World According to Gemmell, by the Legend himself, of which I was an attendee. 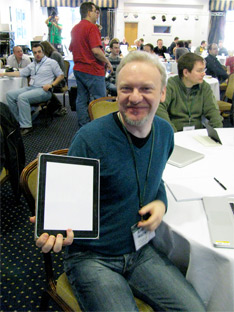 The session started with a discussion about a certain recently released Apple product which was very interesting and allowed us to present our thoughts on the device. We covered such areas as the human psychology behind it, the display of “real” objects as the interface and the much more emphasised touch interaction including two-handed UI, as well as getting “wanky” about the emotional connection with the device.

Andy had also created a great model of the device, that was the exact dimensions (although the back didn’t slope like the real thing) and half the weight of an actual iPad. This was really useful in the talk from Matt, when he was explaining such things as how people would hold the device.

We also discussed the changing seeds of user interfaces and the switch away from clutter-based interfaces, such as inspector panels which ‘can edit anything that has ever lived’.

A few weeks ago Matt sent an email round to all the workshop attendees asking whether we had any UX topics that we wanted to discuss that could form the basis of the workshop. This was a great structure and in the session we got through 7 or 8 discrete topics, from such topics as the evolution of your app and removing features to when the best time to release your 1.0 is.

Although Gemmell said that he had put the slides together quickly and a bit haphazardly (and Scotty had been fiddling around with the slide animations*), the slides were well arranged, and contained only a few – although thought-provoking – bullet points for each topic, and allowed us to really discuss the ins and outs and how one would go about dealing with these problems. The workshop dynamic really helped this section and the group discussion bit was great as we could all have our opinions heard and commented on, with Matt being the suspiciously-bearded ringleader of the event.

Matt’s talk was arranged as a workshop and consisted of around 30 people. The tables had also been arranged into groups of about 5 or 6 and all of this combined made a great, much more personal dynamic for the session, because as Matt himself put it, we were all participants and it was our workshop, not just his.

It was a great social occasion to this end, and allowed for group collaboration which was a real strength of the workshop and made it a really enjoyable event.

A brilliant first day to NSConference and a great thought experiment with lots of things to take away and think about. As I mentioned when speaking to Matt in one of the breaks, the Mac/iPhone/iPad platforms are so brilliant partially due to the fusion and interwoven nature of code and design, the latter of which is given a lot of thought in most instances, which made the workshop a very topical and interesting one indeed.

The Mac conference (Monday 1st Jan – Tuesday 2nd Jan) has a lot to live up to but a great start to what I’m sure will be a great conference.

* I’m kidding, we all know that it was Rob – he was being suspiciously quiet.
Add a comment