Note: After writing this post, I have a project in the works building on some of the ideas I’ve discussed below; you can find PXListView on GitHub.

It seems that many of the apps in use today rely on or display feeds or lists of data; be that a Twitter timeline, an RSS feed or a list of history in a version control system, there’s a common trend in UI for using lists.

But displaying lists in applications can be much more than trivial, certainly for applications on Mac OS X, especially when you have to deal with large quantities of data, and have to solve problems such as variable row heights or changes to this information.

Ever since using Tweetie, a Twitter client for Mac OS X, from a development point of view I was always curious as to how the list view for the Twitter timeline was implemented; hundreds of rows of tweets can be displayed in this control, and the performance hit appears to be minimal; scrolling is smooth, there doesn’t appear to be a huge memory footprint. So how is it done?

If you class-dump Tweetie, you can see three classes at work: 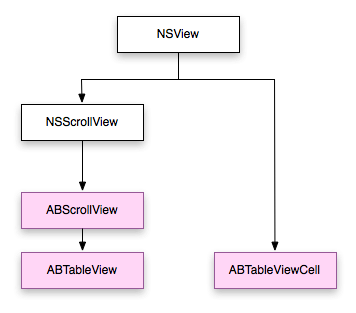 So essentially what we have here is an implementation of something similar to NSCollectionView, which has a set of subviews which each represent a row and have their own place in the view hierarchy. But how, then, is the Tweetie list view so performant?

The answer seems to lie in a method declared on ABTableView, which is -dequeueReusableCellWithIdentifier:. For those of you who are iPhone developers, you will be familiar with a method on UITableView with exactly the same method signature.

For those who aren’t, I shall explain: certainly compared to simple NSCell instances, NSView instances are pretty expensive. In fact, NSCell is actually designed as a “mechanism for displaying text or images in an NSView without the overhead of a full NSView subclass”1. In light of this, if we have 100, 1,000 – or even more – rows in a list, we don’t want the overhead of 1,000 instances of NSView, each used to represent a row. What’s more is that most of these cached views are wasted, since 1,000 rows cannot be displayed in the viewport at the same time. The iPhone takes advantage of this, and ensures that there are only enough view (in this case UIView) instances to cover the height of the table view; if the associated rows are scrolled off screen, then the views are removed from the view hierarchy.

Scrolling works much like laying down track for a train by picking up track from behind it; when a row is scrolled so that it is no longer visible, it is removed from the table view and “enqueued” (ie stored in an array); when a row that is not visible is scrolled so that it becomes visible, the data source should first check to see if there are any enqueued views, and if so it is then added to the view hierarchy and displayed.

What this means is that hundreds of rows can be displayed in one control without a large performance hit, and is one of the optimizations that makes the iPhone UI so responsive.

After class-dumping, you can see that Echofon implements their list views in pretty much the same way as Tweetie, using two main classes:

Although not as explicit as the enquing/dequeuing in Tweetie’s list control, it would seem that FastTableView does a similar job as it has declared on it -popCellForRow:fromArray: and -popSpareCell.

Also to note is the use of NSControl and not NSView as the superclass of the table “cell” object, unlike with Tweetie. I would guess that this is for some of the additions that NSControl provides, perhaps the target/action mechanism.

When displaying large amounts of data in a list, as many applications do, often NSTableView is not enough. It is a pretty performant class, but when you start doing things with variable row heights, it isn’t really cut for the job. Nor is a class such as NSCollectionView; again it doesn’t implement variable row heights and lots of items can slow it down.

It seems that using view objects for each row, which have an established presence in the view hierarchy is the way to go, if you have the optimizations on top of this. For one you get the added convenience of using instances of NSView, and not simply working with NSCell.

As a final note, a quote I recall from Marcus Zarra‘s book on Core Data says:

When working with large quantities of data, it is these kinds of optimizations that make your app more responsive and provide a better experience to the user.