Xcode is Apple’s Integrated Development Environment for applications written for OS X or iPhone OS. With the increasing popularity for software written for both platforms, here are some useful features of Xcode that make coding using it a much smoother and easier process.

There are a plethora of keyboard shortcuts in Xcode to perform common tasks associated with various aspects of the development tool. Here is a handy chart of all the Xcode keyboard shortcuts available (note that this chart was created by Colin Wheeler): 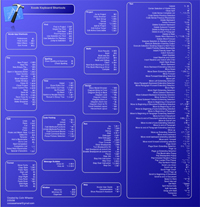 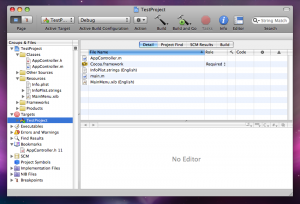 In the Xcode preferences, the default layout is, oddly enough, the Default layout. This is better set to All-In-One, since it adds extra panes to the main window, such as the Page toolbar item, which allows you to switch between the Project and Debug modes with one click, in the same main window. Also, a tabbed menu is added above the editor window, with tabs for Detail, Project Find, SCM Results and Build, which make it easier to access different windows within your project, keeping them within the same workspace. To change the layout to All-In-One, open up the Xcode preferences (⌘+,) and in the General preferences, change the Layout preference to All-In-One.

The #pragma mark directive is very useful in organising implementation files, especially those with a large number of methods. It can be placed anywhere in the source files, and is used as a way of grouping common methods. It takes the form:

Where <Label> is the name you want to associate. For example:

and it allows you to group together methods in the Project Symbols list; with any method signature following the group name being listed underneath the group title you have assigned. 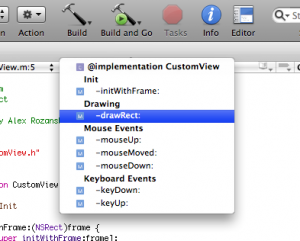 Clicking on any of the method names selects the method declaration in the file and scrolls down to that point; in this way it is easy to navigate around the implementation files, even if they contain a lot of code or methods.

Finding APIs in the documentation

When writing code in Xcode, it is not uncommon for you to need to take a look at the documentation for a particular symbol, be that method, class, or even data types, for example. You could do this by going to Help > Documentation and then typing in the name of the symbol into the search field, and then hitting return. 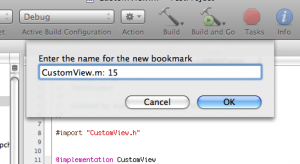 Xcode allows you to add bookmarks to your project, not just of source files themselves, but even lines within the files. These bookmarks get added to the Bookmarks section in the Groups & Files pane. To add a bookmark, place the text caret on the line which you want to bookmark, and select Edit > Add to Bookmarks or (⌘+D); the name of the file the line originates from, and the line number will be displayed as the bookmark name, although this can be renamed by clicking on the bookmark name. 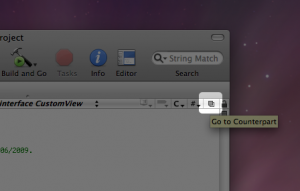 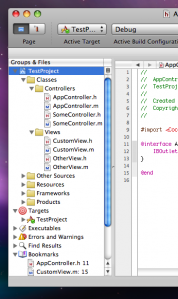 When dealing with Xcode projects, the number of files present can quickly mount up, whether that be source code, resources, NIBs or any other files that your project uses. When adding files to the project, Xcode doesn’t add them to any particular directory in the Groups & Files list, so it is up to you to do this. Note that the directory structure in the Groups & Files list is purely virtual – any movement of files within the hierarchy has no physical effect on disk. To add groups to the list, simply right click in the window and select Add > New Group, and once added, groups can be dragged around like you would in a Finder window. Here is a summary of the various groups and files within the project subdirectory: 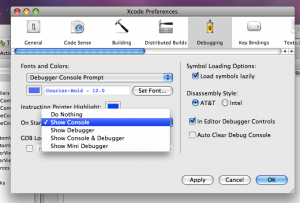 A lot of time is often spent debugging your application. The interface can be made more straightforward in the Debugging pane of the Xcode preferences. There is a popup menu labelled On Start: this is how the workspace will change when debugging of your application begins. Its default is Do Nothing, however selecting Show Console, Show Debugger or Show Console and Debugger are useful so that when you begin to debug your application the workspace can update itself accordingly to make debugging a more straightforward process. 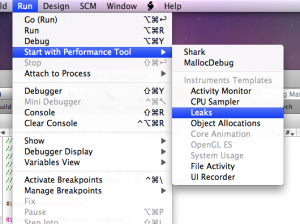 The Xcode Tools do not encompass simply Xcode and Interface Builder; there are a few other other tools bundled with the package that are useful when testing projects, such as Instruments and Shark. Instead of having to build your application every time then manually loading it into the designated tool, it can be done from the Run menu. From Run > Start With Performance Tool, you can load your application into Shark, MallocDebug or one of the Instruments templates, such as Leaks.